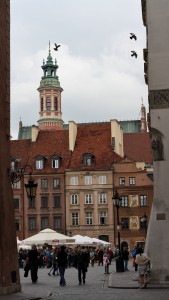 On-Arrival Training is said to be an excuse to meet new volunteers and to have the chance to travel all around the country. It’s really a good point! Actually, my friends in Poznan told me before: try to meet someone who is living in Krakow in order to have somewhere to sleep if we ever go there. They were joking, of course, but not one hundred per cent. But I didn’t meet anyone living in Krakow, by the way. The group from Ukraine, Belarus, Georgia, Latvia… from the East, let’s say (from my ethnographic point of view) is living in Wroclaw whereas the Turkish group is settled in Szczecin. Other two volunteers are in a small village near Bydgoszcz, but they were not very enthusiastic with that place in the middle of nowhere.

First activities were placed in the hostel, where we did some games in order to know better each other. A women wearing leopard print leggings introduced herself as one of the trainers in a very cheerful way. She, in her thirty some, seemed to be much more energetic than most of us. The other one, who was about to arrive, would wear also colourful stockings and spoke with a high-pitched voice. Outside, it was still raining and not even the sky knew until when. 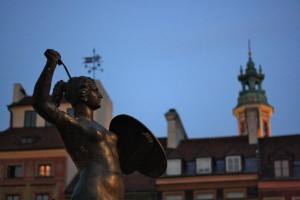 After that we focused on explaining more about our countries and own culture. Turkish and Indian dances, Ukrainian and Bulgarian songs and there was also time to sing in Catalan. On Sunday evening, we attended a guided tour around the centre of Warsaw and we could find out a lot of curiosities and anecdotes, as for example the strange decision of covering the breast of the mermaid, a symbol of the city, on an advertising poster for the 2006 Miss World contest. Mass sexism fighting against puritan sexism. It was not the most interesting thing, but it’s always like that: we use to remember banalities, I don’t know why. 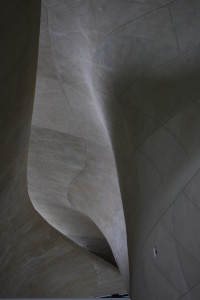 In the midway of the training, during our visit to the Museum of the History of Polish Jews, we asked ourselves about what we find strange about Poland and Poles in general. We mentioned the terrible Polish dubbing system in which a masculine voice speaks over the original dialogue. This voice has no emotions nor gender, it’s there just to make you know what are they talking about. How can people cry or laugh or even scream listening that? Some of us were also a bit surprised about Polish women’s rights. I come from Spain, where people remain in habits and traditions from the past and where something called ethics rules over people, I mean, women. But, still, I can say there is something in Poland that doesn’t smell good. At all. The most disappointing thing, however, is to discover that young people agree with the current situation.

The last evening one surprise was waiting for us in the main room. A Polish folklore group was ready to sing and dance, even with us! 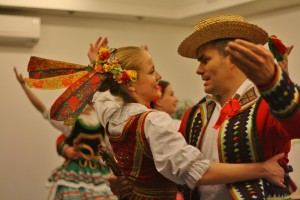