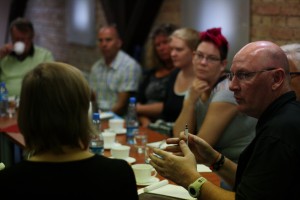 Work trips makes us think about having fun and eating a lot for free. It has always been like that and nobody says that it has to change (as long as from time to time you pay some attention to the matter). Two weeks ago we invited a Swedish association to come to Poznan in order to exchange experiences and good practises as well as to find the way to overcome problems.

The first stop was of course a Polish traditional restaurant to eat… a ton of baked pierogies. People are usually hungry after a journey, that’s why. By the way, what can we talk about during the meals? What do we know about Sweden? Let’s start by Stieg Larsson and all those inglorious Men who hate women; we will talk about Pipi Lastrum later. Ibrahimovic will be our last bullet. Luckily they were not that cold as we thought before. Not even that blond or pallid. 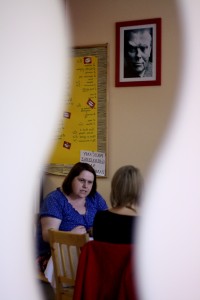 The second day we went first to the Regional Labour Office, which works together with some associations of social cooperatives. A lot of interesting information was provided there, but there is something that keeps repeating in my head over and over again: there are only 3.9% unemployed people in Poznan. In Wielkopolska region 4.9% and in Poland 13%, though there are 27% of unemployment among young people. But, anyway, nothing to do with the 25.3% of unemployment in Spain (53.9% among young people!). For lunch, the workers of the social cooperative Poezja Smaku (Poetry of Taste) were waiting for us with a banquet almost comparable to the medieval ones. The restaurant was supposed to be closed just for us but people kept on getting in constantly. Besides, and according to one of its workers, it’s also the place chosen by the mayor to have a lunch from time to time. The reason: homemade food at low (or fair) prices.

The third and last day of the visit, we and the Swedish went to the Regional Centre of Social Policy (ROPS), institution that tries to employ people after the first six months of unemployment. We learnt there that Wielkopolska is the region that count on the presence of the highest number of social cooperatives in Poland. “There are around 700 people employed thanks to these coops”, assured from ROPS centre. The Swedish, highly surprised, asked then if they had understood well. Finally, they agreed absolutely that, sometimes, social funding is seen by the State as a cost and not as an investment. It’s time to change this short-term point of view then. 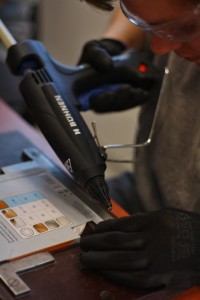 During the last hours of the study visit, we all went to visit Sant-Gobain and Aktywni (Active) social cooperative, where we found out how the members of this occupational therapy workshop deal with the production of equipment for landscape gardening. Six people (three women, three men) were so focus on their work that they hardly realized our physical presence in the workshop. Even when I approached them in order to take some pictures, they still working, pretending I was not there -maybe because is somewhat embarrassing that somebody totally unknown takes pictures about one foot away from you. All of them have some kind of mental illness but there is no doubt that they are ready to work. Perhaps the one that is not is the labour market, unfortunately. They just want to fulfill themselves, to feel useful, however repetitive these tasks may be. “I just want to work”, one of them admited.

Take a look at the whole gallery: Study visit from Sweden 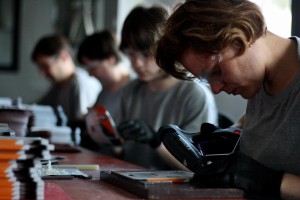