Playing in a place called Ursus 2

Forty five minutes by bus from the centre of Warsaw to the East there is a calm and solitary neighbourhood called Ursus. You will not see many people in the street, perhaps at the most an elderly woman who feels like talking with a group of young people. One shop in a corner, one pub called Garaż because was set up in an old garage. And then, in one of its streets, there is a cosy house with a garden full of plums that fell down some weeks ago. If you ever drop by, you will hear laughs and tears and shouts at the same time. And very likely, some disko polo songs will sound as a background music. If you ever go to Ursus, I will introduce briefly the little people you can find there.

I hate you, I love you 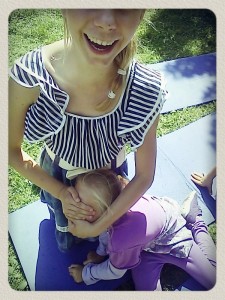 Martyna and Wiktoria are sisters and this is something you will notice from the very beginning because Martyna was Wiktoria four or five years ago and Wiktoria will be Martyna within four or five years. Same blue eyes, same temperament. Wika usually wears a pink cup that seems to be her favourite one for years or the only one she has got. Her furrowed brow says that she is not happy in this moment, or that she doesn’t agree. “Nie!”, her most repeated grumbling. Meanwhile, Martyna follows me to hug me for hours like a tender orphan koala. And, sooner or later, the two blond girls will come back together, either to fight or to love each other. Perhaps both at the same time.

The girl with a high big bun at one side

Every time Samantha feels that her high big bun is not tense enough, she coil again her long curly dark hair, not caring much in how does it looks like but in comfort. All in all she is taking care of some other younger kids, especially a four years old girl, who is on Samantha’s back 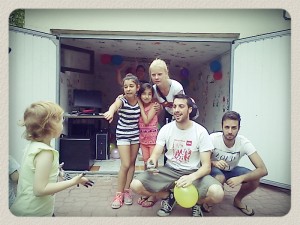 from time to time. And while doing that, Samantha is able to carry out many other things like sharing a bag of chips or making colourful rubber bands bracelets for everybody. She will just ask you which colours do you prefer and in five minutes you get it. A piece of youth in your wrist, so cool. She is from the roman community but, at least in this centre, integration is one of the main goals achieved.

Not an adult yet, not a kid either

Kacper is the first one in saying good morning and the last one who is leaving in the afternoon. He is a fifteen years old boy that you will likely find eating something anytime. His hungry stomach asks him too often to take a walk to the kitchen and find out some warm leftover food. He may drive you crazy with his squeaky voice but he will always try to understand you as well as will comprehend what a farewell in the end means: thank you very much, and goodbye forever.

- So, what are you guys going to do next week, when the workcamp is over?

2 thoughts on “Playing in a place called Ursus”