My approach to social cooperatives has already started. It’s really good to work away from the office from time to time in order to understand better what is all about. What is a social cooperative and how does it work. Better than reading about it, go there and find it out for yourself.

On my second week i 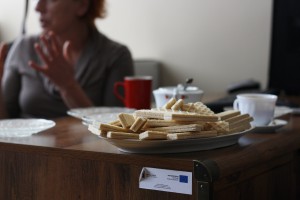 n Poland I went with Karolina and Marek to visit a pair of cooperatives. In the first stop we were concerned about a person from the cooperative who had relapsed into his addiction and of course it turned out a big problem as a group. They were trying to solve this situation holding a hot mug of tea, the best way to face the facts. After that, we moved to a future social cooperative which today is only a deteriorate old building waiting for its restoration. It will be ready next year according to what they said. At lunch time we went to a restaurant where I just ordered stuffed chicken whereas the man responsible of that cooperative ordered two different soups for me “just for tasting”. It’s called Polish hospitality and it’s great! (Even if you are not eating for the rest of the day). 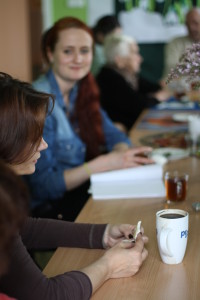 My second experience was with Ola and Przemysław. It began so early: we met at 7:20 am because we had to go far away from Poznań, near Toruń. Travel around by car is relaxing, especially at that time when you are supposed to be sleeping. Anyway, dawn breaks before in Poland than in Spain so the day may start also before. We were heading to a social cooperative in Aleksandrów Kujawski. It was here where I finally met Mario, our Italian specialist. As Ola translated for me, people in charge of this social cooperative, called Kujawianka, were exchanging information and impressions from several experience exchange workshops (warsztaty wymiany doświadczeń or WWD, in Polish) which they had the opportunity to attend in Italy. Right after we went to a second social cooperative in Golub-Dobrzyn, which name is Gold Serwis. We arrived there around lunch time so when we saw biscuits on the table we focused on them rather than in greetings and presentations. In this second meeting, people at the head of that organisation had gone to Italy as well to get some ideas from there in order to implement them in Poland.  The journey was not over yet so after (real) lunch we were driving to another village, Markowice, specifically to a catholic social cooperative named Nazaret. The priest, who is very active in social networks, guided us through the insides of the ancient monastery and showed us the large garden at the back. They have got also a museum dedicated to a priest who helped Polish people especially during Comunist period, when history was difficult to explain from each one’s point of view. The long day was almost arriving to its end, but for sure not without taking a tea and some leftover Easter cakes in the priest office. “What time is it? Jedenasta!? Oh, what a long day..!” 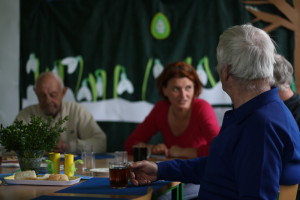 The last visit up to now was in company of Anna and Zibi. We moved first to a social cooperative called Wykon, in Pobiedziska, where I could see the best waiting room in a train station ever. Far from cold benches around a dark and sad room, this one was bright, warm and friendly with some books, a TV, computers and a corner for kids. The second visit took us to the social cooperative Kostrzynianka, in Kostrzyn where we got into a centre that takes care of elderly people. They were about to have lunch so we sat down to one side of the table and enjoyed a warm soup of kapusta and chicken.