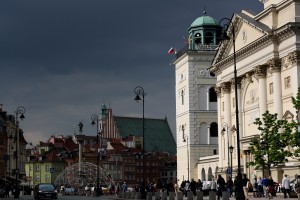 One of the activities you have to do during your EVS is the On-Arrival Training. All European volunteers who have just started their projects in the same country go to meet each other and share different experiences. In Poland, it took place in Warsaw, so it was great for me to visit the Polish capital for the first time. Even though many people in Poznań had told me that there isn’t anything special in that city, I didn’t trust them at all and I went there to see it on my own and verify it.

First of all I had to face with Polish trains. I had heard something about “there will be more people travelling than seats” but, in the end, I didn’t react and I came into the wagon after lots of people in a big hurry. So, indeed, I didn’t find a place to sit down but the tough floor. With one eye in Sputnik Sweetheart Haruki Murakami novel and another on the passengers who might get off on the next station, the regional train started moving to the East. Finally, I found a seat near an elder woman who was sewing for pleasure. Then I looked outside and realized how dark the sky was at noon.

When I arrived in Warsaw it started raining: pada! But not much, just to cool off body and mind. I didn’t bring any umbrella but I didn’t care… in the beginning. After an hour looking for the youth hostel without map, just with the address noted down in a wet paper, it became a little bit annoying. Breathe deeply and pretend that you are a happy rain lover, I thought. 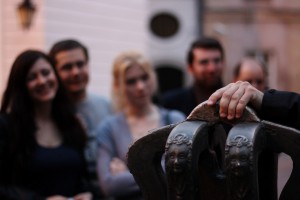 I was still (surprisingly) in a good mood when I found the hostel, so I waited in the room for the activities to begin, patiently. Later my roommate arrived. She was from Sophia, Bulgaria, and spoke Polish rather than English which turned out a clue about what was going to happen next. But I didn’t know it yet. At dinner time I found out that half of the group, around ten, came from the same project and spoke Russian among them. Ok. The second table was taken for a group of Turkish girls and boys who also came from the same volunteer work and obviously were speaking Turkish. The rest were a Romanian girl and an Indian guy. Ok. And me. Most of them arrived there super motivated, with lots of energy, speaking loud, laughing all the time, eating fast. But others were shy, looking around in silence, observing the rest as if it was the first scene of an Agatha Christie’s crime story.